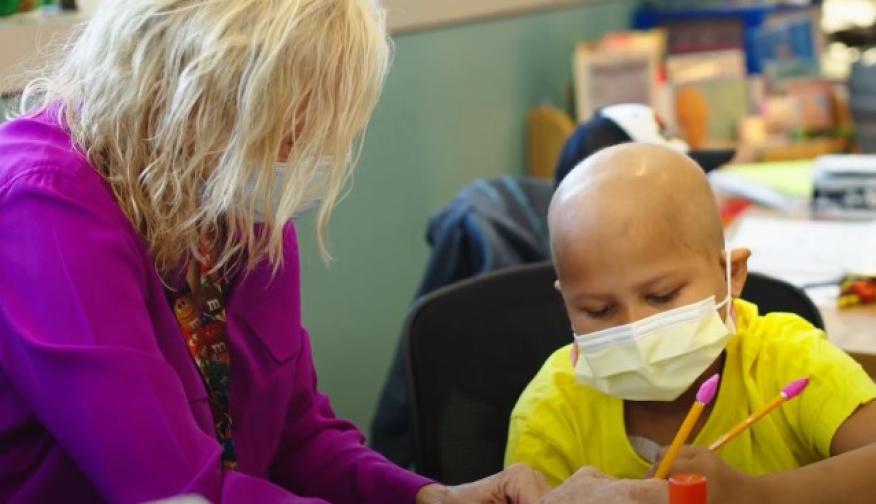 The office of Driscoll Children’s Hospital Lead Teacher Marie Soza is filled with drawings, notes and keepsakes from the hundreds of kids who passed through her classroom in the last 14 years.

In a job that constantly teeters between rewarding and gut-wrenching, one note, in particular, stands out. It’s what gets Soza out of bed in the morning to tackle another day. The message comes from a student who once told her, “You made my day because I got to laugh today.”

She and the child wrote that down, and Soza has kept the note on her desk ever since.

“If we can make them smile and laugh, and maybe learn the multiplication tables, and forget the struggles that they’re in right at that moment, that’s the most important thing,” she says.

Children aren’t supposed to be chronically ill. This expectation amplifies the fear and struggle of the unlucky minority of families who face childhood illnesses. Missing out on essential activities of child development, like playing, socializing and attending school, makes childhood illnesses even harder to bear.

This is why hospital schools like Driscoll’s Panda Cares Center of Hope classroom are so essential. The school not only keeps kids from falling behind their peers academically, but it also gives them the sense of normalcy they so desperately need.

Robin Smith, Driscoll director of patient and family services, says, “The classroom is vital to these children because it gets them away from the bedside. We’ve got kids programming all the time at Driscoll, but stepping away and entering an environment they’re used to gives them a sense of normalcy. It also helps them maintain their education so that when they go back to their regular school, they’re not far behind. That means so much to these kids. The school provides a central piece of life for them.”

Creating a bubble of normalcy, education and empathy is what makes Soza’s work so meaningful. “Kids are supposed to be in school. That’s a normal part of their life,” says Soza.

Anyone who spends time in the Driscoll classroom knows that it’s a warm, safe and vibrant environment of normal childhood experiences. “It’s a place where kids feel comfortable at a time when not many things are comfortable,” says Sumer Duhon, assistant teacher.

This is the reason the American Academy of Pediatrics (AAP) emphasizes the importance of providing access to hospital schools for all admitted children, as early as the first day they arrive. “Hospital schooling is critical to the care of school-aged children whose education is disrupted by frequent or lengthy hospital stays.”

Research also shows that access to school services reduces stress for caregivers of hospitalized children as well. “Caregivers whose children used school services describe themselves as less irritable and with higher emotional control compared to other caregivers,” according to a study in the Italian Journal of Pediatrics.

Lead teacher Marie Soza is driven not only by her love for her students but also by honoring the memory of her own son, Blaise, who was a Driscoll patient. Blaise died at age six from a brain tumor after 16 months of treatment. Soza senses her son’s presence helping her in the classroom every day.

Blaise was the middle of three children, who was happy and full of life. He loved playing with friends in his neighborhood, staying up late to watch TV and doing pretty much anything active. But at age four, Blaise complained about pain in his legs while at gymnastics class. When it didn’t improve, he and his parents went to the doctor and eventually to a neurologist at Driscoll.

Blaise was diagnosed with a brain tumor, and Soza’s life as she knew it shattered. “It's not what you expect as a mother. I knew my life was going to change. You're in shock. You know, you have this plan for your life, and that is going to change.”

In spite of confronting every parent’s worst fear, Soza says that Blaise’s young age helped him cope with the trauma of his life-threatening diagnosis.

She recalls a time when they were at the hospital talking to one of Blaise’s friends there from the Valley. The boy mentioned he was unhappy because he couldn’t run anymore.

Blaise turned to him and genuinely asked what was wrong. “Here is my son in a wheelchair without any hair thinking, ‘Nothing's wrong with me. I don't know what you're complaining about.’”

Soza credits Driscoll with making her son feel so comfortable and content. ”He loved the nurses. He didn't mind going to the hospital. That was a blessing for me.”

Blaise was treated at Driscoll for 16 months before dying on Nov. 15, 1996 at age 6. He spent his last night opening Christmas presents and donning his favorite shark hat to a party with his family and neighbors. He’d already lost friends in his short life and was looking forward to playing with them in heaven.

“That was a gift he gave me. You have a party and you go to sleep and then you wake up, and you’re with your friends,” says Soza.

Nearly 27 years later, the pain sometimes dulls, but it never goes away. Teaching in Driscoll, though, gives Soza’s painful journey more meaning. “You go through life, and you have these scabs that sometimes wear off. But I get to go to work and share my life with these kids at the hospital, and what great kids.”

As the lead teacher in the Driscoll classroom, Soza draws from the strength she gained from Blaise.

Soza’s dedication to her work amazes her colleagues. “She comes in here with a smiling face every morning ready to go and watches children go through the exact same thing her son went through,” says Duhon.

Keeping track of hundreds of past students is a challenge for any teacher, no matter how beloved, but for Soza, her students have her heart.

She prays for them, consoles them, guides them, mothers them and, of course, educates them. She empathizes with their struggles and celebrates their achievements – all the way through college and even marriage. “I’m so proud after watching what these kids go through. They don’t have normal childhoods. But to survive and go to high school, go to college and get married? Wow. I tell them, your courage, your fight did that.”

Children at Driscoll have access to the eighth-floor hospital classroom as early as their first day of admission. The school is part of the Corpus Christi Independent School District (CCISD). Students in the hospital for a short time, from grades pre-K through 12, can get support from Driscoll teachers to keep up with their home district curriculum. Those at Driscoll for an extended time can officially enroll in Driscoll’s school instead. The school typically serves more than 200 patients per year since it was re-established with Soza at the helm in 2008.

Unlike a typical classroom environment, Soza and assistant teacher, Duhon, teach children of all ages at the same time. They toggle between subjects like advanced algebra and basic arithmetic in the same hour. They also adapt schedules and lessons to serve the complex cognitive, emotional and physical needs of their students. This can change in a moment, depending on students’ physical strength, mood and medication. Both teachers are quick to modify lessons to accommodate students' needs, either in a group setting, one-to-one or even bedside, as medically appropriate.

For hospitalized children, just being in a room with other children who can relate makes a tremendous difference for the social and emotional health of a child. Duhon says, “To be around kids who are going through something similar, even if it's not the exact same diagnosis, makes them feel like they belong. They truly feel like a part of the family. They get to know one another. They have friends. It's a normal classroom.”

Both Duhon and Soza recognize that one of the most important ways the classroom helps kids is by putting them back in control of one area of their lives. Students can choose what subject they want to learn each day or even request a game when they need a distraction from an upcoming procedure. Duhon says, “Here in the classroom, they have options. When they’re in the clinic or in their rooms, doctors and parents tell them what to do. When they’re in the classroom, we ask them what they want to do today.”

The teachers also have to transmit skills that healthy children never need to master. “It's not just a teaching job. We just don't teach the four core subjects. We have to teach how to deal with pain, how to deal with your siblings’ jealousy and how to be polite to your parents when you're grouchy.”

They also work closely with the medical and Patient and Family Service team to support each child. Both Soza and Duhon work with doctors, nurses, social workers and physical therapists to ensure kids get access to the care they need. As teachers, they’re sometimes the first to notice an issue, and other times the first people a child confides in. “We’ll tell them when a kid needs speech, physical therapy or a neurologist, and they listen. They respect us,” says Soza.

Soza’s work as an educator and as a partner with students’ parents is fueled by an extra measure of empathy. “I understand how difficult it is to get out of bed, to lose your hair, to lose your friends. One girl this year started crying because her friends don’t talk to her anymore. That happened to us. Everyone goes on with their life and you’re in the hospital. I understand those things. I think that helps.”

Duhon sees the impact Soza’s life experience has on students and families every day. “She’s seen what it’s like to be the parent of a sick child, and she’s seen her sick child. She knows the ropes of what these kids go through. She maneuvers around the hard stuff and makes it easier for them because she understands.”

Once Soza works with a student, she’s their teacher for life. Robin Smith, Driscoll's director of patient and family services, says, “She is for these kids that teacher that they'll always remember. She's just got that fire in her, and I think that's Blaise.”

Soza has no doubt that the fire that keeps her motivated at work every day is from Blaise.

“I think Blaise would be proud of the way that I've continued to live his legacy to try to be happy, to make something good out of something bad that happened in his life, in our lives. And I think he's smiling at me.”