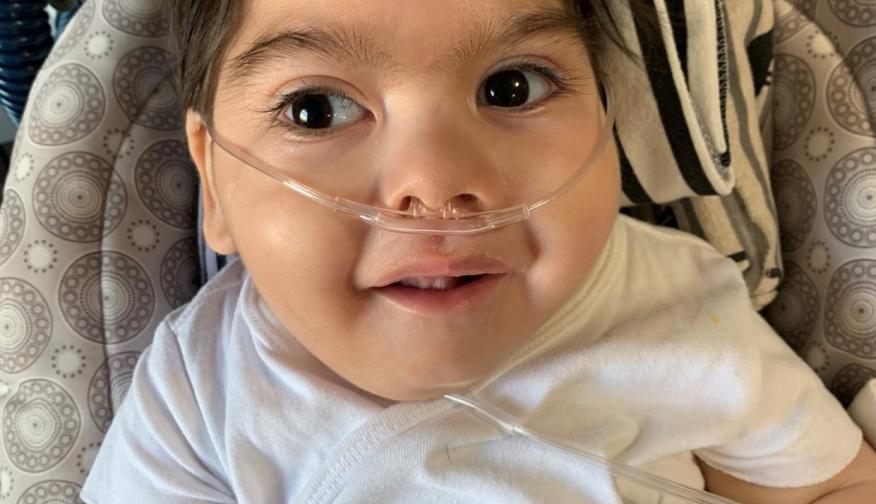 A Gregory mother is thankful Driscoll Children’s Hospital staff have been so considerate and caring as her family deals with taking care of a special needs infant.

“Mason smiles so much more now than he did before. There was a time where Mason never smiled. He still doesn’t really move his arms or legs but with therapy in the home we are working hard at that and his head control. We are also very thankful he is growing – sometimes with these conditions failure to thrive is a big concern but he is coasting along and growing,” said Michelle Garza, Mason’s mother.

Mason Garza was born Oct. 13, 2019, with a rare gene mutation called SCN3A, which led to a number of related health issues. Among the conditions caused by the gene are lissencephaly (a smooth brain surface lacking normal folds) and microcephaly (an abnormally small head). He also has respiratory problems and is now on continuous oxygen.

Mason’s brain malformations were discovered when an MRI was conducted at Driscoll Children’s Hospital on Dec. 10, 2019, after having the metal hardware removed from his jaw from the mandibular distractor surgery performed by Craniofacial and Plastic Surgeon Kevin Hopkins, MD.

“I remember meeting with Neurologist Robin Whitehall, MD, in the NICU and her telling us the findings and the first question I asked was ‘how long will he live?’ I knew that anything with the brain would cause significant delays, issues, seizures. I then just fell into my husband’s arms and cried and cried. It was completely devastating news but now we had answers for all of his issues that were going on,” said Garza.

“I remember our first nurse, Gabriela Trevino, welcomed us and Mason with open arms,” said Garza. “The neonatologists, nurse practitioners and the nurses who cared for him became family and I knew most by name.”

“All of these Driscoll Children’s Hospital employees are Team Mason. They all listened to me and knew that I would always advocate for Mason and they trusted that together we would make the best decision for Mason,” said Garza.

“It can be really overwhelming anytime you have new physicians, nurses, therapists who don’t know your child and their baselines and the staff always asked me to fill them in and kept me involved in Mason’s care of treatment throughout his admissions. I know that at any given time we are admitted that our Driscoll Children’s Hospital team will have my back with Mason’s care,” she said.

Garza has remained close to one NICU nurse, Bree Rivera, RN. The two are working together to try to get mobile assistance for Mason.

“I recently spoke with her about how she has been waiting on a wheelchair for Mason for almost a year. She was tearful and exhausted. Having just had a baby myself and knowing the struggles of being a mother, I couldn't imagine the struggles as a special needs mother she must be going through,” said Rivera.

“Michelle & Mike Garza will always hold a special place in my heart. They are amazing parents and have done everything in their power to get Mason what he needs,” said Rivera.

Garza is well aware how important it is to have a connection with others.

“Mental health is so important for moms like myself who are the primary caregiver for any terminally ill individual and if I didn’t have the support system I have I might have ended up in a very dark hole. Mental health needs to be talked about more and accepted and people need to reach out to one another – literally one text can change someone’s day or thoughts and that is huge,” said Garza.

“Living this life is not easy. My family as a whole makes huge sacrifices on a daily basis. There was a time I was so afraid to be at home with Mason and that something might happen. I used to live every day second by second, then that became minute by minute, which now has turned in to day by day.”

Garza is adamant in letting Mason help determine his future.

“If you have a special needs child – whether you find out at birth or later on – you can call Driscoll Children’s Hospital home. I am forever grateful for Driscoll and the care they have given and continue to provide for Mason,” said Garza.

“I have heard many many stories from families who have children with lissencephaly and doctors tell them their children will not walk, talk, eat by mouth and won’t live past two years of age. DCH has never ever told us that; even when diagnosed we were told Mason would write his own story and he will let us know what he can and cannot do.”